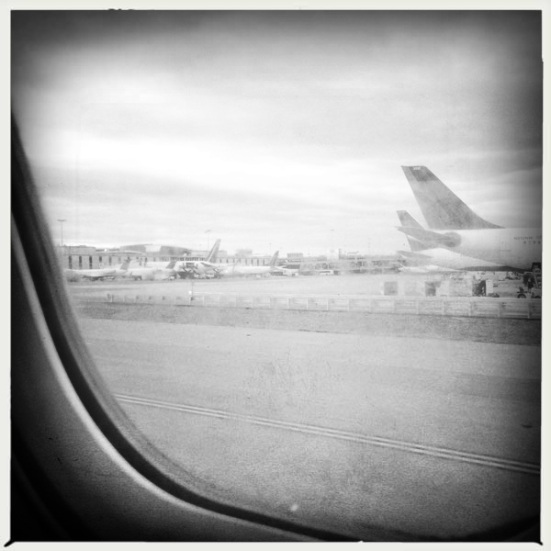 A couple years ago, I read this article about a guy who was only comfortable crying at movies while on an airplane, and I can’t help but think about it each time I board.  I have yet to figure out what it is about airplanes that allow you to be so emotional in your own space while still sitting next to another? Today, staring out the rain-streaked window at the terminal in Vancouver, Canada, waiting for the plane to be pushed back on to the taxiway, I sit in a state of happiness.  It wasn’t always this way.  Actually, it is a long way from where I was in the spring of 2010, staring out plane windows, constantly trying to keep my face from looking like the rain outside. During that time, I made sure to get a window seat, not just so I could look out at the view, but if my head was turned away, there was less chance of someone catching escaped tears roll across my cheeks.

There was a series of work flights between LA and Miami and Jamaica, when every time I sat back in my seat, the aircraft engaged its engines and lifted its wings to the air. During that moment of anti-gravitation, I felt a sense of release (and simultaneously, to cause a faulty mechanism in my tear ducts) and so, I had to battle the constant verge of crying for the next 5 hours.  Reclining amongst 65-150 strangers and some not so strangers, I released the many tears that I couldn’t at home.  When traveling as much as I was, it was easy to chalk it up to jetlag and not have to explain (and that was only if anyone chose to ask) about my then recent separation.  Luckily, it went mostly un-noticed because of the management of coincidentality; that when the wheels emerged from the flaps on the underside of the belly, the functionality of my tear ducts re-engaged as well. The sound of arrival cleared my head and the grounding jolt of landing shook away any remaining drops of water; it was time to get back to work.

It was a much different episode in my life, and even though the rain in Canada looks the same as the rain in Jamaica when it sits on a 12” pane of acrylic, the distance between the two is so great, in time as well as in miles.  I am glad to have traveled them, but even more glad to feel no need to return.

Why I choose to share all of this, I don’t know.  Maybe I’m starting to believe that the ability to be vulnerable is a good thing.  Maybe I would like to encourage more people to try it, and see what constructive reactions could come from it.  Maybe because it has to start somewhere. Through a recent conversation with a good friend, we agreed that posting somehow authenticates and makes you responsible for truths (even if they are only your own.)  For as much as I write this and fear that no one will read it, I fear that people will (yes, contradictory, and maybe more so frightening.)  I find it funny when others refer to me as only this tough motorcycle chick, but those layers of armor and ballistic nylon protect a lot of soft parts. Maybe it’s recognizing that the tougher thing to do is put it out there.

So, as much as I hope this entry (to quote the movie magnificence of Blade Runner) “… will be lost in time, like tears in rain” amidst so many words already out there, I hope even more so, this falls upon those who it needs to.

Today, staring out the 12” rounded rectangle of visibility, I sit, with a smile on my lips. Thankful to have had a solitary two years; thankful for these unspoken emotionally protective bubbles we can fly with, and even more thankful we don’t take them off the plane with us. Somewhere, probably in that grand distance of flat land horizon between the coasts, the airlines lost my baggage… and I’m glad.  Today, with rosiness the only thing on my cheeks, I stare out the window, not at the rain but at a new terminal in wonderment of what is next.  As I recline into the seat, embracing the rush of wings taking flight, I am happy to have a ticket in hand.  Even though the destination is printed neatly in black and white, I am still not sure where I am going to land.  I welcome the uncertainty… and delight in the change.

4 thoughts on “How the airlines lost my baggage.”